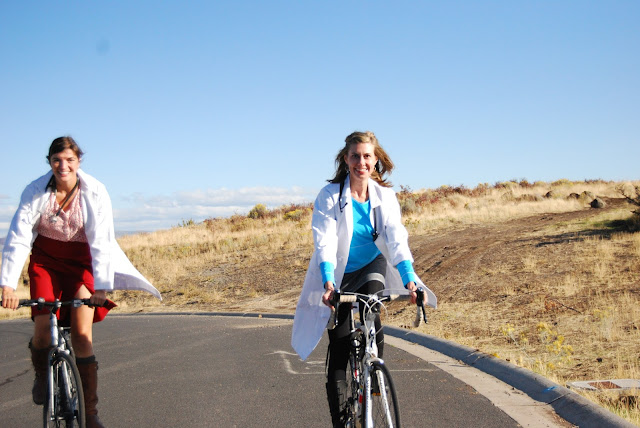 After a cursory glance at Stephanie's Facebook page, at the incredible outpouring of love and support that she has received, these are some of the adjectives that have popped out.

Stephanie was in an accident on Saturday and suffered severe head trauma.  Currently, she is still on life support, but after donating her organs, it will be removed in the next couple of days.  Her family and Bryan, her fiance, are with her in Portland.

It is always tempting, when someone dies, to blow them out of proportion.  Stephanie was human - I know that - I worked side by side with her for the past four years.  However, she was the best person that I have ever known.

It can be hard to work with the best person you've ever known.  No matter what you do, you come up short, and I struggled with this in the past couple of years.  My ego would take a blow and I would get frustrated and I would want her to make a mistake or snap or be - dammit Stephanie - like everyone else!  But, she wasn't.  No matter how I pushed her, her response was always kindness.  And if, by chance, it wasn't her first reaction, she apologized immediately after.

There are many mantras that Stephanie would encourage me to live by.  Always do what you love.  Work hard.  Don't accept mediocrity.  Always proofread.  But, I would say that the most important lesson that she taught me was to always be kind.

I can picture her - in the doorway of my office, saying "I think that the most important thing is to be kind."

A couple of days later I apologized and said that it didn't matter what I thought, but that we should always behave as we believe and I admired that in her.  And as her lessons slowly sunk in, I would begrudgingly agree with her.

Stephanie is the voice in my head.  It's why I can't quite accept that she's leaving us.  It's because she's still there - whether giving me her insight on ponytail holders or face lotion or expounding on her life philosophy - she's still there.  And may she always remain.

M and M said…
Oh, Katherine...I was just talking with kids this morning about the legacy of MLK,Jr. We discussed how legacy was what remained after someone was physically gone, and how his legacy, of words and deeds, was vast and lasting. Your words about Stephanie point to how she left a legacy of kindness, in word, and deeds.

I am so deeply sorry. Her time in this community was too short. Kindness and love are always good answers, good practices. A worthy legacy, indeed. Love to all, how were touched by the kindness of this stellar human being. Thank you Katherine for who you are, and your heartfelt reflection.
January 11, 2017 at 2:01 PM